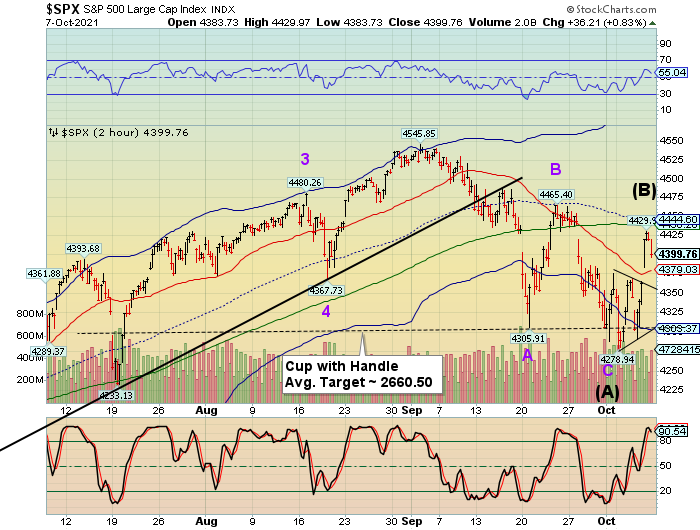 ZeroHedge reports, “US equity-index drifted in a tight range overnight, in a tight range before key jobs data that could provide clues on the Federal Reserve’s policy. As noted in our preview, unless the jobs report is a disaster, it will virtually assure the Fed launches tapering in one month. Markets drifted higher on Thursday after the Senate averted the risk of an immediate default, pushing global stocks on course for their best week since early September, but a late day selloff wiped away most gains and closed spoos below the critical 4400 level. At 07:30 a.m. ET, Dow e-minis were up 35 points, or 0.10%, S&P 500 e-minis were up 5.00 points, or 0.1%, and Nasdaq 100 e-minis were up 10.75 points, or 0.07%. Treasury Yields were 1 point higher after earlier tagging 1.60%, the highest since June. The dollar was flat while Brent topped $83 before paring gains. Bitcoin traded above $55,000.” 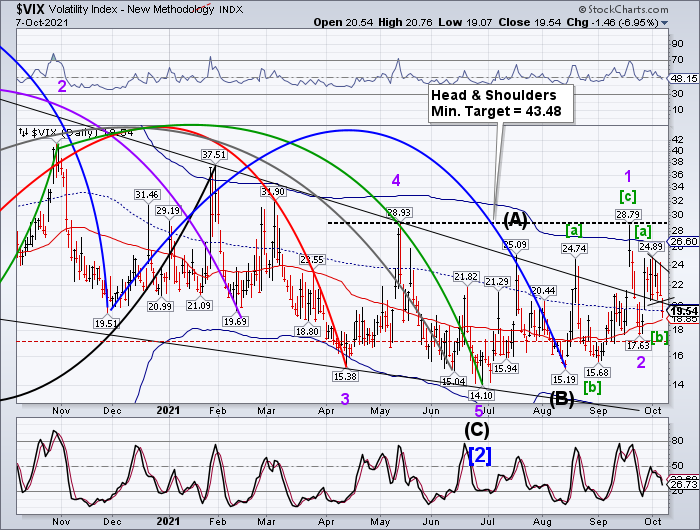 VIX futures did not make an overnight low, but are hovering near the bottom of yesterday’s trading range.  Its structure is a mirror (inverted) image of the SPX Triangle.  This may be a very powerful send-off due to its positioning as a Wave 3.  Often Wave 3 is amultiple of Wave 1.  In this case we are projective Wave 3 to be 2X the length of Wave 1…still leaving Wave 5 for the coup de grace. 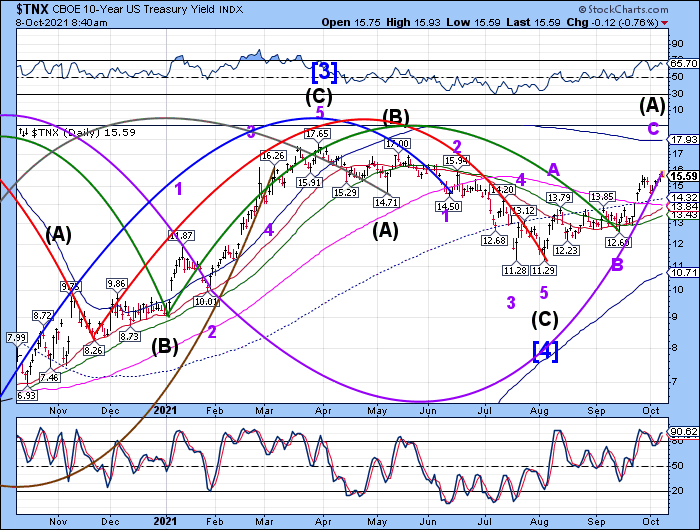 TNX futures peaked at 16.01 this morning, then sold off after the Jobs Report.  Tis may very well be the end of the current Master Cycle, on day 254, as the structure appears complete.

ZeroHedge remarks, “A much worse than expected print for non-farm payrolls has prompted chaos in equity algos but a clear signal from the bond and FX markets.

The dollar dived (taper if off/delayed)… 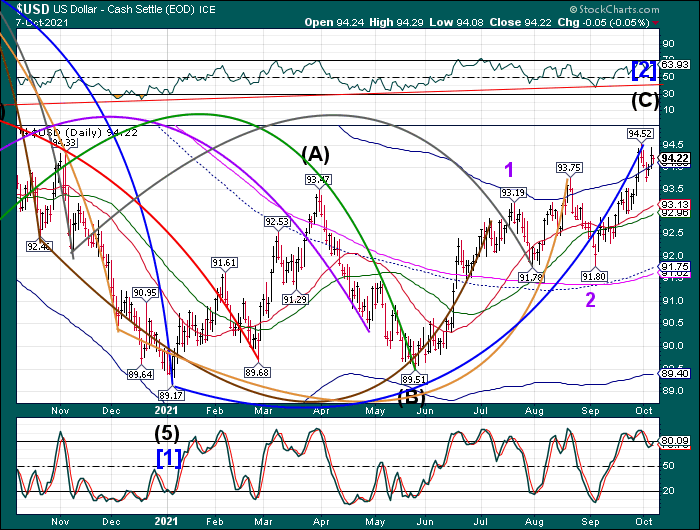 USD futures puled back to a low of 93.93 this morning after the jobs report.  The decline may last a few more days as the news is parsed.

ZeroHedge remarks, “Well, coming into today’s payrolls report we said that the number would be a beat and the only question was how big, as a result of millions of Americans seeing their emergency benefits expiring. Boy were we wrong: moments ago the BLS reported that with expectations of a 500K print and whisper numbers sharply higher, in September the US added just 194K jobs (in fact, the number came below the lowest of all but one of the 71 economist forecasts, with just Banque Pictet’s Thomas Costberg forecasting a 0 print). Sept payrolls were down by nearly half from the upward revised 366K in August, the first back-to-back monthly drop in payrolls this year and the lowest print of 2021 (even as then umber of Household survey showed an increase of 526K jobs in the month!), likely impairing the Fed’s tapering schedule as this number was so bad as to pass as a “major shock” from the Fed’s perspective, even if as the BLS itself admits a big reason for the drop was a seasonal adjustment in local government education, which may have pulled the number down by some 150K.”