We are attending a family gathering at a northern lake for the next two days.  I will not be available for the blog tomorrow and possibly Thursday. 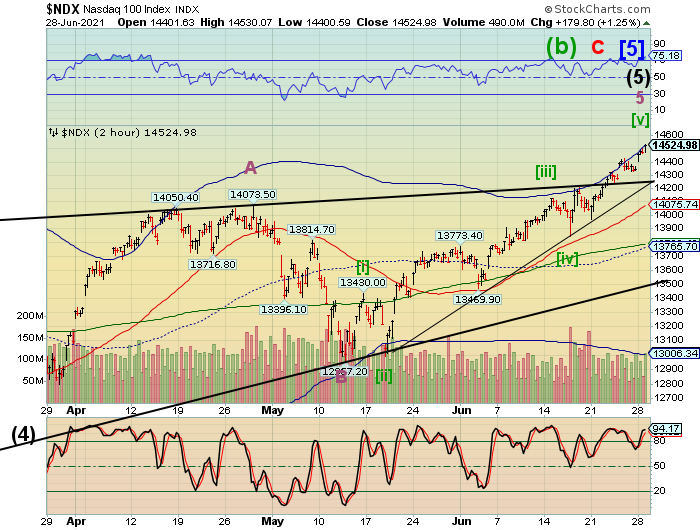 While sentiment remains buoyant, investors are growing concerned by the latest evolution of the Delta variant, which is increasingly seen as a growing threat to the ongoing economic recovery in many areas, said Pierre Veyret, a technical analyst at ActivTrades. Even if the economic impact is “unlikely to be significant” in developed countries, “the inconsistency in vaccination campaigns in other parts of the world is likely to lead to an uneven recovery,” he said.” 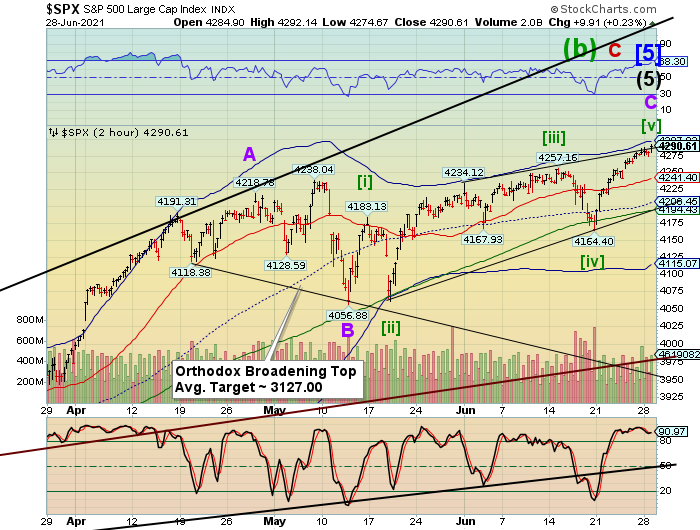 SPX futures also made a new all-time high at 4282.88.  The cash market has made its target of 4291.00 yesterday, but the influence of the Industrials may keep it pegged near the top for another day or so as the DJIA has a target near 34800.00 (see yesterday’s final commentary). 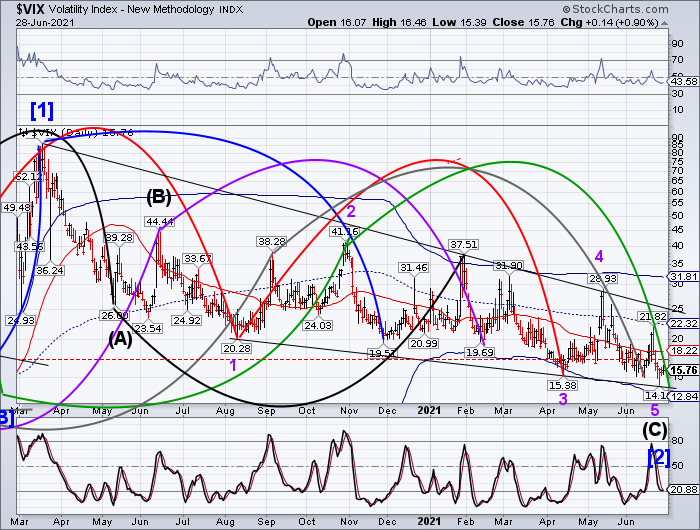 VIX futures made a new low at 14.10 this morning, raising the probability of a new Master Cycle low today on day 243 of the current VIX Master Cycle.  The Ending Diagonal has been prolonged.  This is likely due to the fact that it is easily manipulated and has knock-on effects on the equity indexes.   The appearance of calm in the VIX gives a false sense of security as this formation acts like a coiled spring with a target of a complete retracement of the Diagonal. 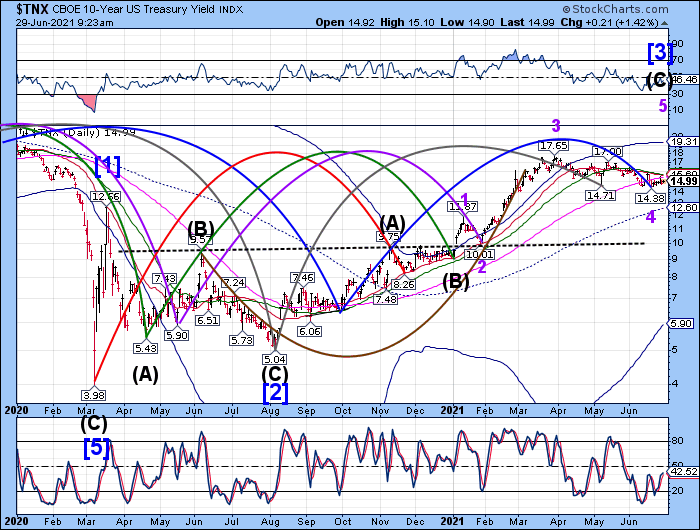 TNX has pulled back to 14.90 as it chips away at the 50-day resistance at 15.33.  Additional resistance lies at the Intermediate=term level at 15.60.  A breakout may have dire consequences for the Fed, who appear to have control over rates.  That is simply not the case.  Once the breakout occurs, the Cycles Model foretells a month-long rally that may match or exceed its November 2019 high at 19.71.

ZeroHedge observes, “As in the stagflationary 1970s, the US Federal Reserve is once again denying that its own policies are the reason for a recent surge of inflation, even though there is good reason to think that they are. It is not too late to learn from past mistakes and reverse course – but the clock is quickly ticking down.

Fifty years ago, on June 22, 1971, US Federal Reserve Chair Arthur Burns wrote a memorandum to President Richard Nixon that will long live in infamy.

Inflation was picking up, and Burns wanted the White House to understand that the price surge was not due to monetary policy or to any action that the Fed had taken under his leadership. The issue, rather, was that “the structure of the economy [had] changed profoundly.” Accordingly, Burns was writing to recommend “a strong wage and price policy”:

“I have already outlined to you a possible path for such a policy – emphatic and pointed jawboning, followed by a wage and price review board (preferably through the instrumentality of the Cabinet Committee on Economic Policy); and in the event of insufficient success (which is now more probable than it would have been a year or two ago), followed – perhaps no later than next January – by a six-month wage and price freeze.”

Perhaps owing to Burns’s reputation as a renowned scholar (he was Milton Friedman’s teacher) and his long experience as a policymaker, the memo convinced Nixon to proceed with a wage and price freeze, and to follow that up with a policy of wage and price controls and guidelines for the entire economy.

For a time after the freeze was implemented, the controls and guidelines seemed to be working. They were even politically popular for a brief period. Inflation inched down, and the freeze was followed by more compulsory controls requiring firms to get permission from a commission to change wages and prices.

But the intrusive nature of the system began to wear on people and the economy because every price increase had to be approved by a federal government bureaucracy.

Moreover, it soon became obvious that the government controls and interventions were making matters worse. 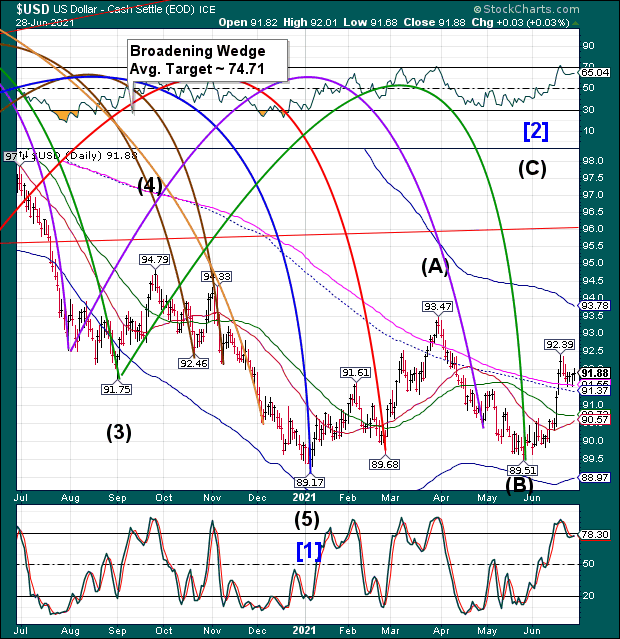 USD futures are on the rise again in a probable rise to the Cycle Top at 93.78 in strength over the next week.  However, that may not be the extent of the rally, as it is due to resume through the end of July. 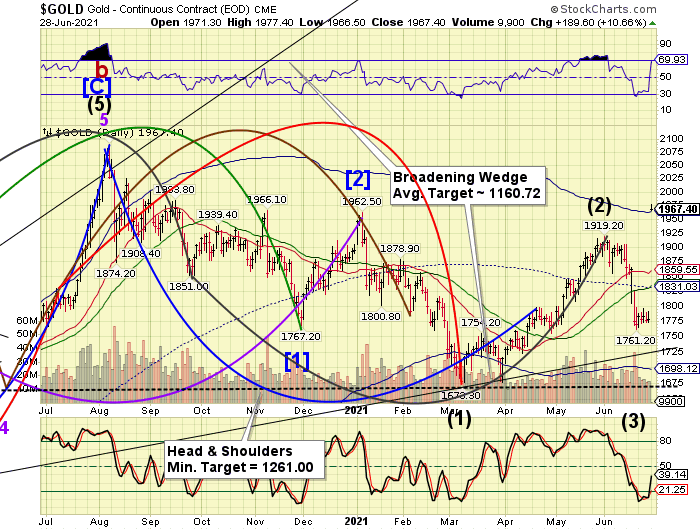 Gold futures plummeted to 1750.15 in the overnight market as it makes its way to test the Broadening Wedge trendline at 1725.00.  The Cycles Model just posted the sign, “Abandon all hope ye who enter here.”   Should the decline cross the trendline, the decline may continue through mid-August.