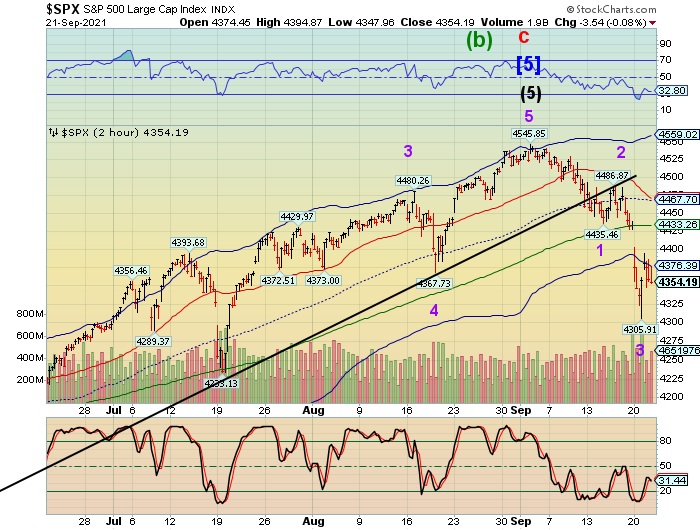 SPX futures rose to an overnight high of 4388.50, cchallenging the Cycle Bottom resistance at 4376.39, but staying beneath yesterday’s high of 4394.87.  This is meant to work off the oversold condition so that Stochastics reach 50.00 before going back down.  Yesterday’s gap is likely to remain unfilled.

ZeroHedge reports, “Despite today’s looming hawkish FOMC meeting in which Powell is widely expected to unveil that tapering is set to begin as soon as November and where the Fed’s dot plot may signal one rate hike in 2022, futures climbed as investor concerns over China’s Evergrande eased after the property developer negotiated a domestic bond payment deal. Commodities rallied while the dollar was steady.

Contracts on the S&P 500 and Nasdaq 100 flipped from losses to gains as China’s central bank boosted liquidity when it injected a gross 120BN in yuan, the most since January… 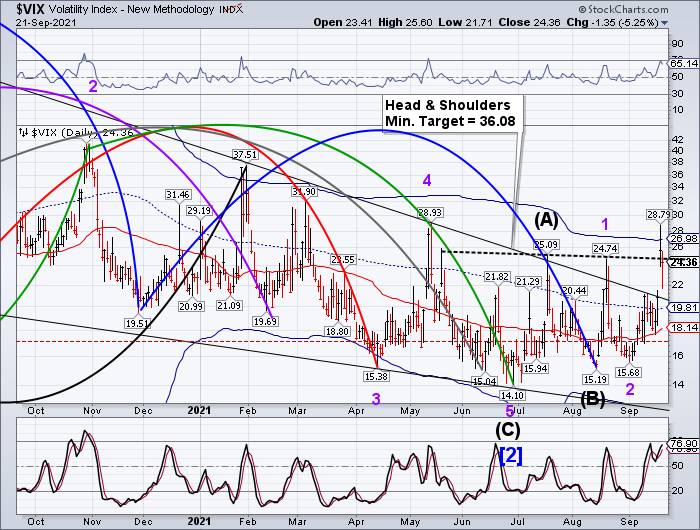 VIX futures declined to 22.66, still within yesterday’s trading range.  The Cycles Model suggests a double spike in strength starting today and lasting through the weekend.  In addition, there appears to be another double spike during the week of October 4.  This week’s spike appears capable of meeting or exceeding the Head & Shoulders minimum target of 36.08. 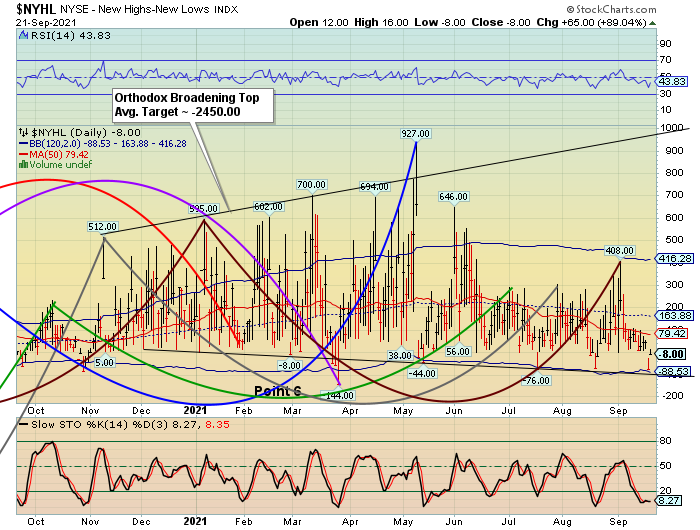 The NYSE Hi-Lo Index closed at -8.00 yesterday, maintaining the sell signal.  Today is day 258 in the Master Cycle, so there is a possibility of an attempt to ramp the number of new 52-week highs.   However, the probability of the VIX ramping by the end of the week suggests otherwise. 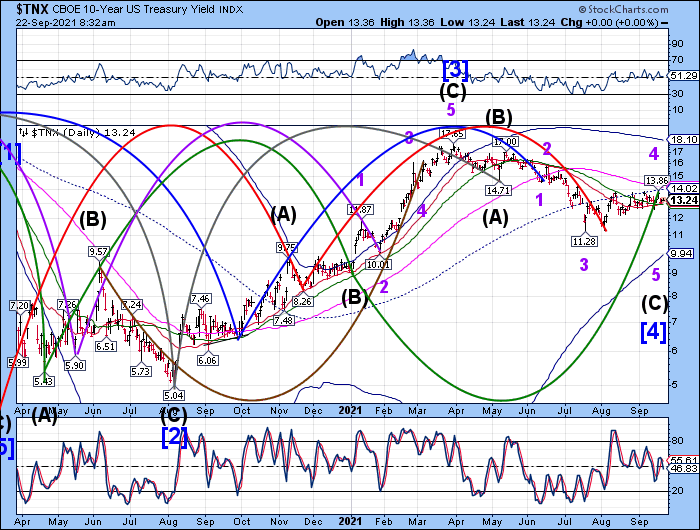 TNX appears slightly positive this morning, especially since it is above the 50-day Moving Average at 12.52.  However, a break of that support may send TNX down to the Cycle Bottom at 9.94 in the next three weeks.

ZeroHedge reports, “As expected, in a surprisingly close, 220-211 vote, the Democratic-controlled House passed a bill that would suspend the U.S. debt ceiling into December 2022 and provide the government funding to operate past Sept, 30 if it passes the Senate which it most likely won’t because Senate Republicans, even RINOs such as Mitt Romney, have vowed to block it over the debt limit provision which Democrats purposefully included in the provision.”

The bill from McConnell and Shelby does not include a debt ceiling suspension, as Republicans have urged Democrats—the majority party—to raise the $28.4 trillion debt ceiling themselves through reconciliation, a special parliamentary procedure that would expedite the passage of a budgetary measure through the Senate.

[ZH: The introduction of the bill likely increases the probability of no Senate deal, and for now, the market is tending to agree as debt ceiling anxiety has not eased at all]” 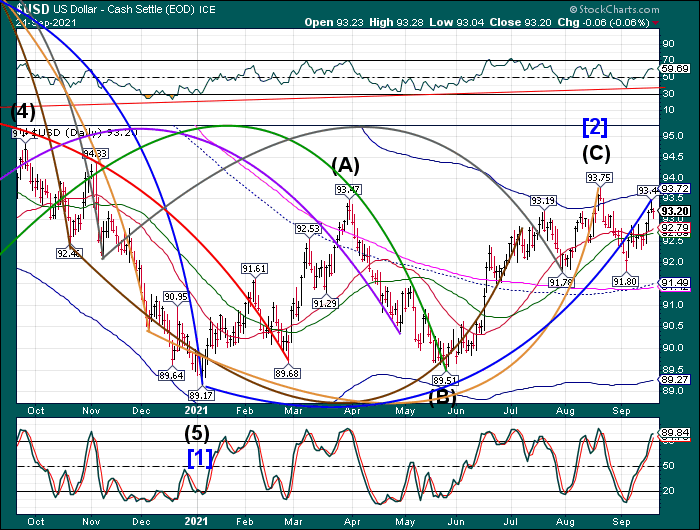 USD futures consolidated in range during the overnight session.  From a Cycles vantage, this week appears to be calm, but next week may be a barn burner as the decline gets underway.  The Cycles Model suggests the decline may last through mid-November before any relief appears. 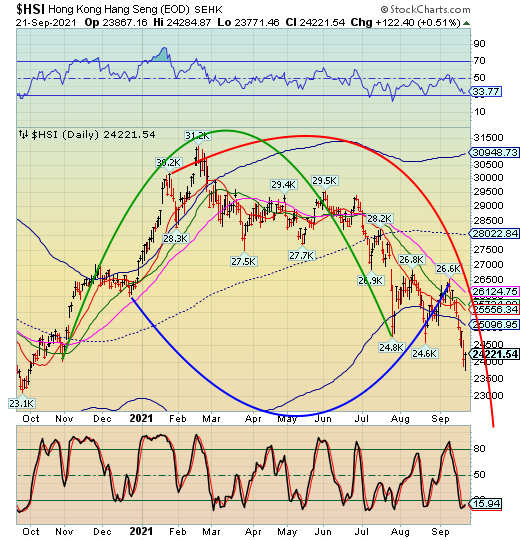 The Hang Seng (Hong Kong) Index rallied last night on news of the Evergrande repieve.  But the decline may not be over, despite the bounce.  The Cycles Model suggests the decline may continue until October 10, over two weeks from now.  Undoubtedly, there will be more bounces along the way as the index is oversold.  However, the recovery may not take place until the Master Cycle is complete.

As we noted earlier, in its filing to the Shenzhen Stock Exchange, the Evergrande unit said that it reached an agreement with yuan bondholders on an interest payment due Sept. 23. It, “has been resolved via negotiations off the clearing house,” but didn’t specify how much or when it will pay the 232m yuan coupon at stake.

The language is potentially ominous because under normal circumstances, Chinese bond issuers would simply transfer money to a clearing house to complete payments. The “off-the-clearing house” approach usually means direct but delayed, or partial payment to bondholders. There could even be a lower interest rate involved. In short: it’s one way to avoid being called a defaulter.

As Bloomberg’s Shen Hong wrote, “Evergrande may have secured bondholders’ agreement with a payment extension or at least succeeded in asking them not to act until compromise is reached, even as it misses the payment due Thursday.”

ZeroHedge further comments, ““If that’s true, we are very close to the China Syndrome ”

Evergrande’s imminent default is rocking markets – but few believe the collapse of a Chinese property developer could trigger a global financial crisis. What if Evergrande is just a symptom of a deeper malaise within the Chinese economy and its political/business structures? Maybe there is more at stake than we realise? What if Emperor Xi decides he needs a distraction?

Amid this week’s market turbulence, and the overnight headlines, Evergrande dominates thinking this morning. The early headlines say the risk is “easing”. Don’t be fooled. S&P are on the wires saying it’s on the brink of default and is unlikely to get govt support. It’s Asia’s largest junk-bond issuer. Anyone for the last few choc-ices then?

The market view on the coming Evergrande “event” is mixed. Some analysts are dismissing it as an internal “China event”, others reckon there may be some systemic risk but one Government can easily address. There is some speculation about “lessons” to be learnt… There are even China supporters who reckon its proof of robust China capitalism – the right to fail is a positive!

I’ve got a darker perspective.

The massive shifts we’ve seen in China’s political/business public persona over the past few years have been variously ascribed: a reaction to Trump’s protectionism, China taking its place as a leading nation, Xi flexing his military muscle, and now a clampdown on divisive wealthy businesses to promote common prosperity.”