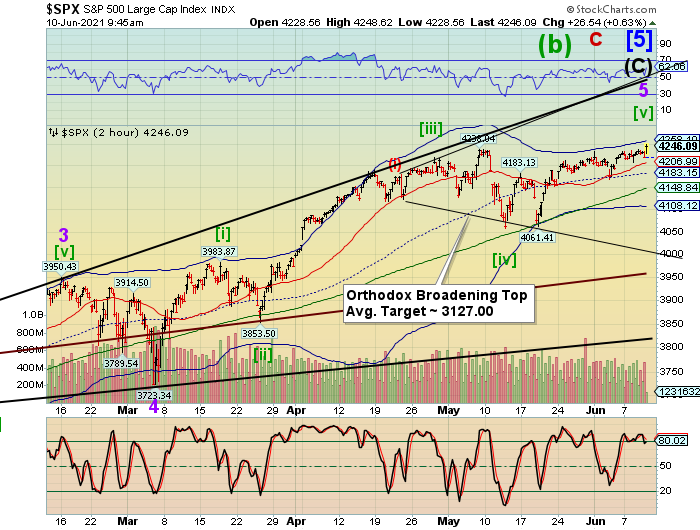 Back in April I had posted a target for the SPX at 4250.00.  Then I forgot about it as The May 7 high rolled by.  Well, it was resurrected this morning.

ZeroHedge proclaims, “Traders bid up US equity futures ahead of the bell after a hotter than expected inflation print this morning…

Billionaire fund manager Stan Druckenmiller clarified the farce…”The market is not speaking right now on May’s CPI data and will not until the Fed stops cancelling market signals and at that point we will know.” 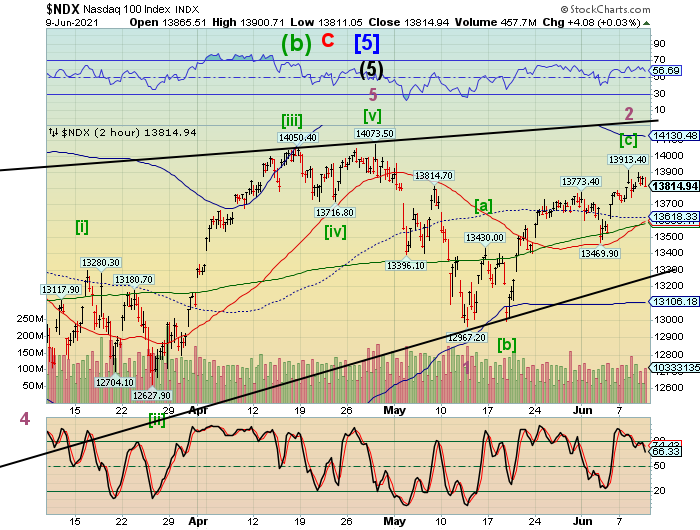 NDX futures are in decline.  Yesterday’s failure to make a new high gave us a clue that all is not well in the tech market.  Futures rose to 13839.50 at midnight, then have steadily declined since then.  As mentioned yesterday, the Cycles Model suggests a 12.9-day collapse from yesterday’s high. 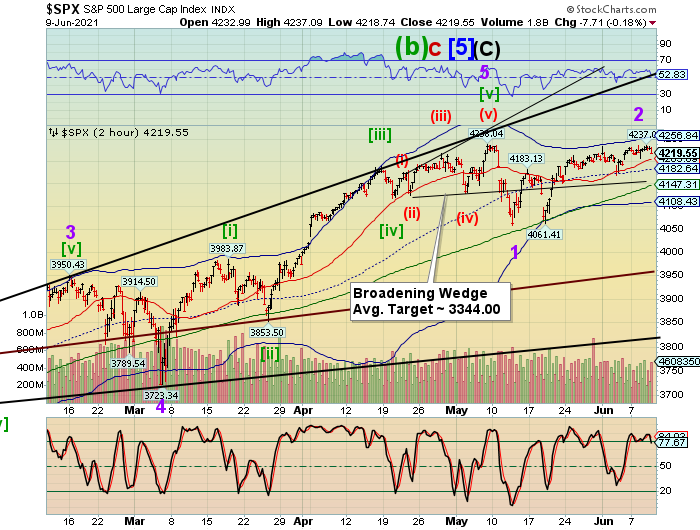 After making a retracement high at 4237.02 yesterday, SPX futures languished, but did not decline beneath Short-term support at 4209.89 in the overnight session thus far.  A break of that level puts us on high alert of a gamma crash below 4200.00.  The Cycles Model gives us confirmation of that beneath mid-Cycle support at 4182.64.   The 50-day Moving Average and Broadening Wedge trendline are both near 4150, which triggers a minimum decline to 3344.00.  But that would only Primary Wave [3] of Cycle Wave I.  Primary Wave {5] must venture beneath the 2020 low at 2191.00.

ZeroHedge reports, “Welcome to Super Thursday when in a double whammy of market-moving events we will first find out how the ECB intends to adjust monetary policy as Europe brings the pandemic under control (we expect no material changes), and we will also get to see whether the startling jump in April’s U.S. inflation numbers persisted or even accelerated in May, perhaps rising by the most on record. Needless to say, markets could move substantially on any surprises and yet, listless futures are trading as if nothing notable will take place and with both the ECB announcement and a sharply higher CPI already priced in, they may be right. 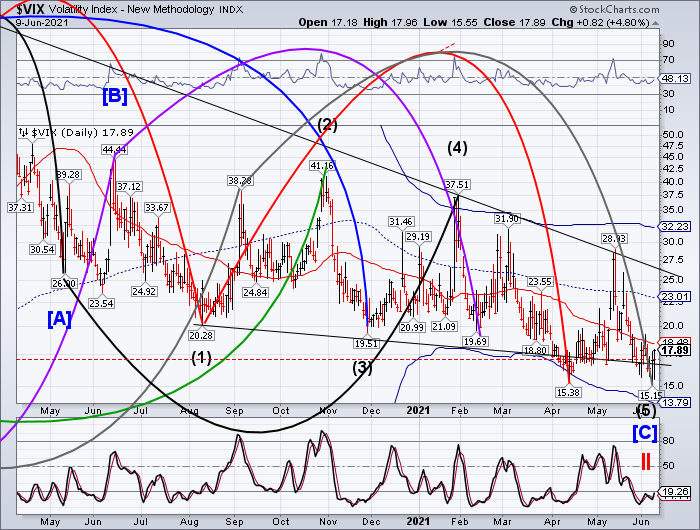 VIX futures remain suppressed, but may bounce at the open as options settlement is completed for yesterday’s options expiration.  The 5-Wave decline and lower low tells us that Tuesday’s low was the end of not only th e Master Cycle but also the declining trend outline by the bullish Wedge. 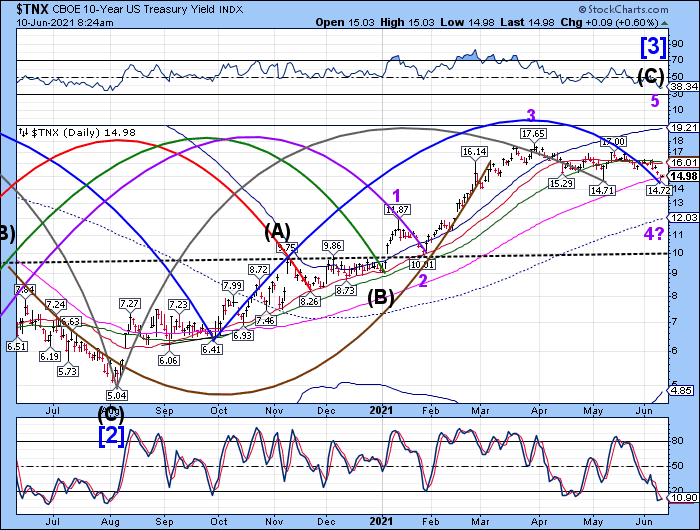 TNX is back above the 100-day Moving Average at 14.91 after testing it yesterday on day 253 of the Master Cycle.  There is a probability of another probe lower before the master Cycle is complete.    The strength of that probe may depend on the CPI report given later today.

ZeroHedge observes, “Yields on 10-year Treasuries dipped below 1.50% today for the first time since early March amid a furious short squeeze discussed earlier…

… and as post-pandemic inflation concerns appear to be waning as quickly as they flared up.

This is a point we first brought up last month when observing the collapse in China’s credit impulse, arguably the most important variable for the entire global reflationary narrative (see “China’s Credit Impulse Just Turned Negative, Unleashing Global Deflationary Shockwave“)… 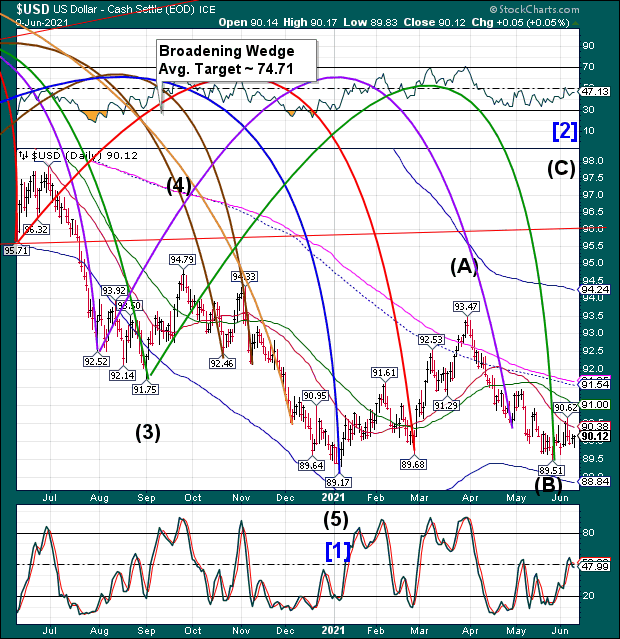 USD futures rose to 90.28 in the overnight session, still beneath Intermediate-term resistance at 90.38.  however, note the breakout last week, giving fair warning of a higher USD.  The Cycles Model alerts us to growing strength through the end of the week.

ZeroHedge reports, “With the world’s eyes having moved on from China’s rip-roaring PPI (and post-data decision to unleash price controls), this morning’s CPI print has been heralded as the arbiter of “is it transitory or not” with some (BofA) even suggesting we are nearing a period of “transitory hyperinflation.” The answer for now is – inflation’s still accelerating as headline CPI soared 5.0% YoY (hotter than the +4.7% expected). That is the highest level of inflatuion since Aug 2008.

But it is core CPI that is the huge outlier, soaring 3.8% YoY – the hottest level of inflation since 1992…”