The S&P GSCI Ag Index is climbing higher after touching its Head & Shoulders neckline at the 61.8% retracement level last week.  The Cycles Model suggests that this uptrend may last until mid-July and that the Head & Shoulders target may be an understatement.  This Cycle is based on real supply and demand, not liquidity-induced mania.  However, the mania will come in spades to anything related to food.

ZeroHedge reports, “We’ve documented (read here & here) this spring of a “megadrought” sweeping through the western half of the country and could be one of the worst in decades. This is troubling news because major water reservoirs have already dropped to dangerously low levels, cutting off access to farmers.

The latest US Drought Monitor map shows nearly the entire western half of the nation is experiencing some level of drought at this moment. Parts of the Southwest could be undergoing their second Dust Bowl as conditions continue to deteriorate. ” 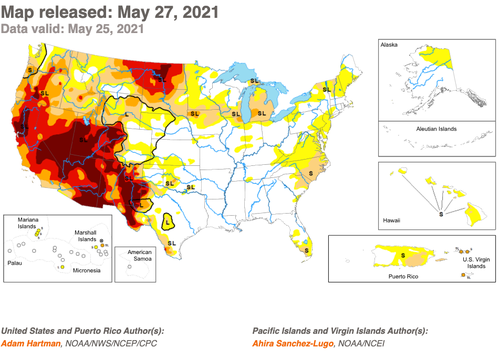 You can see that the entire upper Midwest, including Michigan, is being affected.  Farmers and ranchers are culling their herds for lack of feedstock.  That is why (at least in the Midwest) meat prices have been low.  Not any more.  A highly suspicious cyber attack on the largest meat processor in the world may cut off supply and raise prices dramatically.

As noted earlier today by the White House, USDA is aware of the ransomware attack against JBS, which is affecting the company’s operations, including its facilities in the United States. USDA continues to work closely with the White House, Department of Homeland Security, JBS USA and others to monitor this situation closely and offer help and assistance to mitigate any potential supply or price issues. As part of that effort, USDA has reached out to several major meat processors in the United States to ensure they are aware of the situation, encouraging them to accommodate additional capacity where possible, and to stress the importance of keeping supply moving.

USDA has also been in contact with several food, agriculture and retail organizations to underscore the importance of maintaining close communication and working together to ensure a stable, plentiful food supply. USDA will continue to encourage food and agriculture companies with operations in the United States to take necessary steps to protect their IT and supply chain infrastructure so that it is more durable, distributed and better able to withstand modern challenges, including cybersecurity threats and disruptions.”

SPX futures are hugging round number support this morning as dealers are loath to see it decline any further due to a large negative gamma strike due on Friday at 4200.00.  Weekly options expirations are now being utilized due to crowding at the monthly expirations on the third Friday of every month.

ZeroHedge reports, “One day after a concurrent ramp (then reversal) in stocks and the VIX prompted some confusion on trading desks, on Wednesday e-mini futs were stuck at the 4200 gamma pin…

… while European stocks rose and Asian markets fell as the tussle between economic optimism and inflation concern continues to play out in markets. Bitcoin and the dollar ticked up, oil and treasuries were mostly flat.”

NDX futures are likewise hugging the mid-Cycle support/resistance at 13652.00, another level where options sentiment change from positive to negative.

ZeroHedge notes, “Major indexes have continued to trade inside their respective ranges for the past months. We have seen a few “shake outs”, but markets have reverted back to the range, frustrating momentum chasers.

Interesting to note is that several of more risky assets have decided to move sharply higher over past sessions. We have seen notable squeezes in EEM, EWZ, CQQQ. These are all “exotic” risks and show a lot of the risk willingness among investors, especially as SPX remains rather dull here (our most recent logic on EEM here, Brazil here and Asian tech here).”

VIX futures are also consolidating beneath the 50-day Moving Average at 18.85.  Yesterday may have been the Master Cycle low at 15.68 precisely on day 258.  To see a trendline break such as this after the end of a trend is highly unusual.  The short vol trade is obviously involved, but this also reeks of Fed and big bank meddling.  The question of the day is, will the VIX stay beneath the 50-day until weekly expiration?

USD futures consolidated near their Master Cycle low overnight.  The shorts have had a field day, so the trade has become very crowded.  The Cycles Model suggests a rally into early July with strength beginning to build next week.

ZeroHedge observes, “As we approach the second half of 2021, many countries around the world are beginning to relax their COVID-19 restrictions.

And while this signals a return to normalcy for much of the global economy, Visual Capitalist’s Marcus Lu notes that there’s one subject that’s likely to remain controversial: government debt.

To see how each country is faring in the aftermath of an unprecedented global borrowing spree, this graphic from HowMuch.net visualizes debt-to-GDP ratios using April 2021 data from the International Monetary Fund (IMF).