SPX has spent 12 days from top to top, thus far.  It is still uncertain whether it may attempt yet another probe higher.  This much I can say… a decline beneath the double support at 4163.89 may produce a sell signal.   The VIX is still lingering beneath its 50-day Moving Average at 19.06.  Above that comes confirmation of the oncoming decline.  There is risk everywhere in the markets.  I wouldn’t object to going short before the close, but it’s your call.

ZeroHedge comments, “Ahead of today’s 1:15pm overnight Reverse Repo deadline we asked (for the second day in a row) if today was the day the repo market finally cracks, pushing the amount of reserves parked at the Fed to a new record above $500 billion.

And for the second day in a row, we were off, but we are getting warmed by the day: on Tuesday, the Fed revealed that the amount of overnight reserves parked at the Fed rose by another $38BN to $433BN (with 48 counteparties, down from 54 yesterday) from $394.9BN on Monday, which was the 3rd highest in history, up a whopping $190 billion in one week and the highest non-quarter end reverse repo usage ever!” 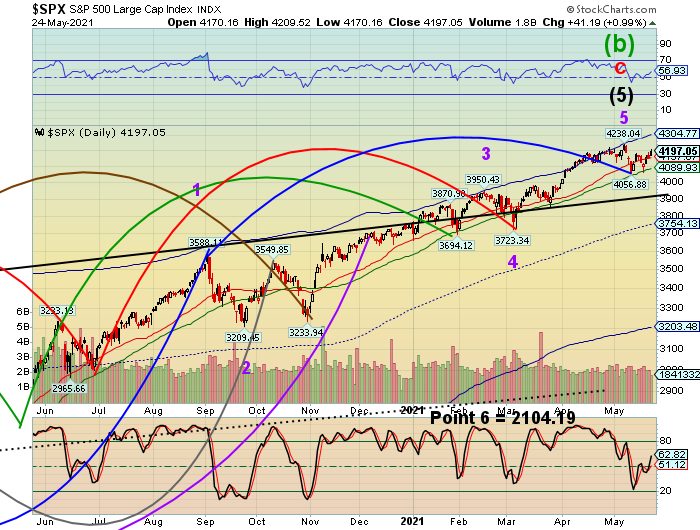 SPX futures reached an overnight high of 4212.62, elevating the notion of a new all-time high in the making…or is it another fake-out?  Should the SPX challenge the May 7 high (correction:  the may 12 low is day 252 and the Master Cycle low thus far), a possible target may be near 4250.00, extending the Master Cycle.  Today is day 265 should this take place.  May 7 was day 252, which is still favored.  Should the May 7 high remain, we may see the SPX decline into early June.

Should a new high be made, that would be the correct Master Cycle.

“Monday’s lethargy seems to have been shaken off after a chorus of Fed voices delivered dovish statements, downplaying arguments for early tightening,” said Nema Ramkhelawan-Bhana, an analyst at Rand Merchant Bank in Johannesburg, “Let’s not forget that it only takes one inflation print to unsettle investors or a strong economic figure to guide nominal yields higher. And so the lesson is to make hay while the sun shines.” 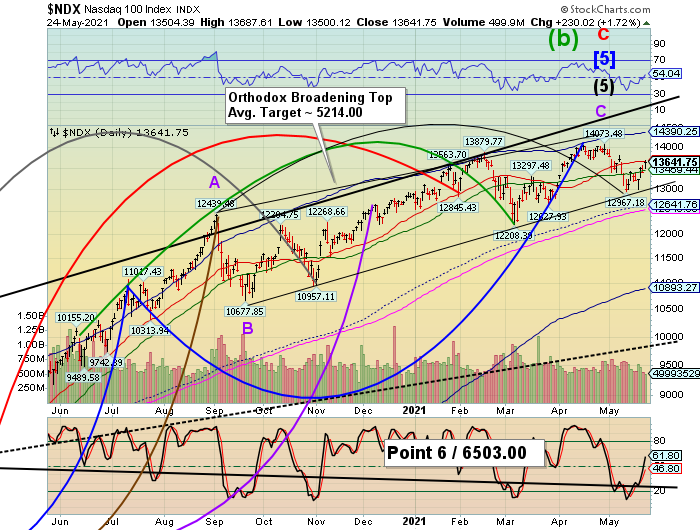 NDX futures also made a new overnight high at 13738.50, but appear to have stalled.  Yesterday’s close was beneath Intermediate-term resistance at 13667.13, indicating possible difficulty above that level.  We will know more at the open.  NDX’s failure to thrive (make new highs) since the April 29 high is telling.  Selling in the NDX is likely to produce selling in the blue chips, as well.  Rotation can only go so far.  A decline back beneath the 50-day Moving Average at 13459.44 may have a universal effect on equities.

ZeroHedge reports, “Ahead of today’s 1:15pm overnight Reverse Repo deadline we asked if today is the day the repo market finallys crack, pushing the amount of reserves parked at the Fed to a new record above $500 billion.

We were off, but not by too much: on Monday, the Fed revealed that the amount of overnight reserves parked at the Fed rose by another $26BN to $394.9BN (with 54 counterparties) from $369BN (52 counterparties) on Friday, which was the 5th highest in history, up a whopping $186 billion in one week and the highest non-quarter end reverse repo usage ever!”

VIX futures dove to a low of 16.87 in the overnight session, testing the May 7 low at 16.71.  The powers that be  know that VIX can be manipulated, especially in the overnight market.  This may be an effort to push the SPX into a new high in time for the Memorial Day weekend, which is normally a positive period on the calendar. 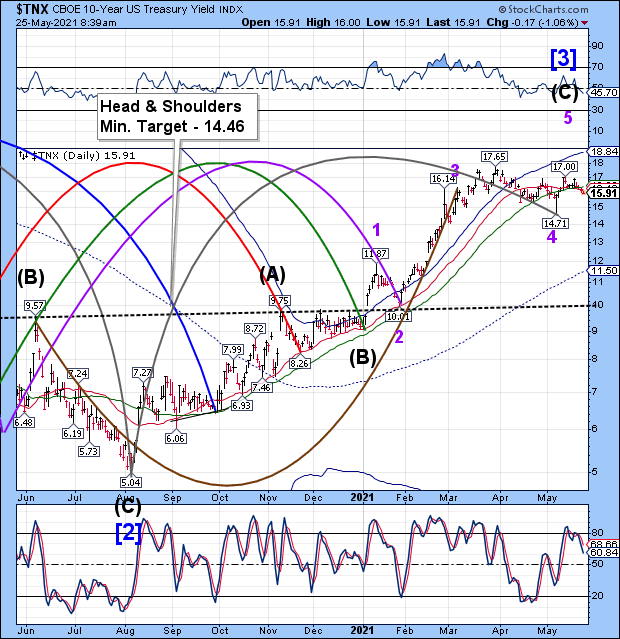 TNX slipped beneath Intermediate-0term support at 16.12, on its way to 15.85, the 50% retracement of the bounce out of the Master Cycle low.  TNX appears to be poised to make new highs by the end of the week, according to the Cycles Model. 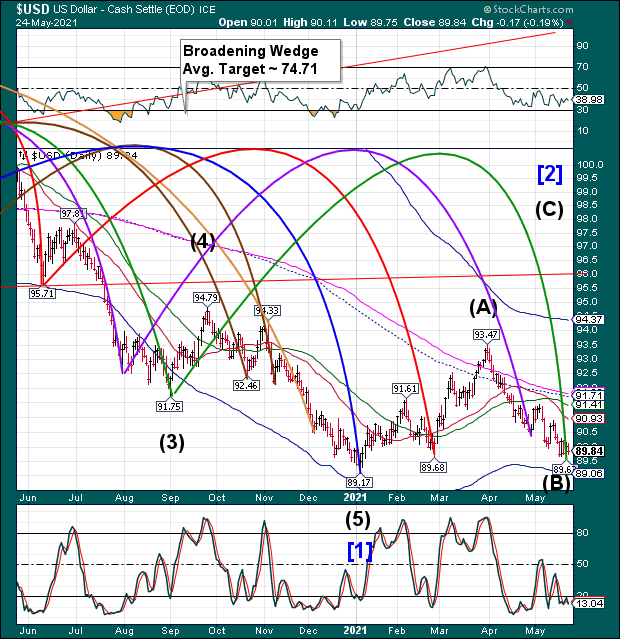 USD futures made an overnight low of 89.86.  Despite the calls for the USD to decline further, the low on Friday at 89.63 remains.  The USD is due to rally in strength to early July.